Let There be Light

In my clubs old newsletter, “Semaphore” Volume 22 No. 9 back in September of 2013, I did an article on LED strip lighting for use with layouts. In it I had gone and done some measurements of light output, amperage and so on of a selection of LED strip lights. Well, it is time for an update as time marches on and new products emerge all the time. Since that time, a few new LED types have come onto the market and are worth considering and I have gotten some in so as to test. So here goes.

I grabbed my old test rig which had the 4 strips of LEDs on it and found I just had room enough to attach the 2 new strips I had bought. 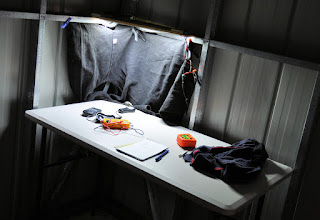 So a bit of a re-jig, some soldering and I was ready. So I went into my shed and put up a bit of black cloth on the wall so as to not get too much reflection of light to ruin the measurements. I grabbed one of many cheap 12 volt 6 amp power packs I bought at the same time as the LEDs and plugged it in to only find no power coming out of it. Another was tried and the same result of no light. Strange. So I changed the plugs, power cord and extension lead all to no avail. So a third power pack was grabbed and voila, we had light. I then tested the power packs that weren’t working, and yep, they had just stopped working – dead as dodos. So in the bin with them – not as long life as a good decent power pack made for our conditions, that’s for sure. So here are all the LEDs aglow: 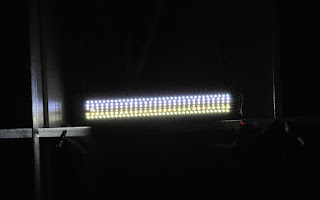 This time I just set the light measuring gadget to about 50 cm away from the LED’s and took the one set of measurements for each LED type. I redid the tests to make sure that each reading was consistent as well. All strips were 50 cm long and were of the 600 LEDs per 5 metre roll sizing except the two new strips. The new strips were of the 50 cm aluminium backed type which are quite sturdy. These new types, and the old four, all contain the same number of LED’s per meter – 72. So for our tests here, there were 36 LED’s per strip. Oh, and all the LEDs were of the “Cool White” type as well. Here is a photo of the six types: 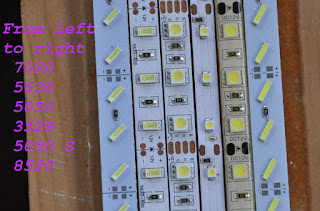 Additional information: the 7020 and 8520 strips were of the solid aluminium backed type – nice and sturdy. The 5050 S type is a waterproof version and has silicon over it for that protection.

So we can see that the 5630 type LEDs strips are still a great bang per watt of input power. Now of course these are all “PK” measurements, so throw a bag of salt over your shoulder, but it gives you at least something to base your own voodoo guess on. Just a quick browse of eBay shows these selling at about 6-10 bucks per 5 metre strip.

And here is a closer shot of each of the strips lit up by themselves and merged into the one photo. It shows them better since they weren't fighting each other. The 7020 is at the top. 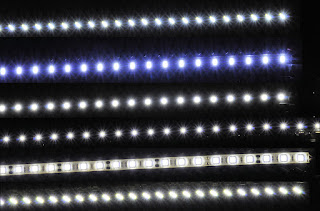