Having practiced on some larger locos of late, it was now time to get some DCC Decoders into some of my little N-Scale shunting locos - the EMD SW1200 and SW9 Yard Switchers.  In real life these little beasts were built in the early 50's and 60's and had 12 cylinders giving them 1200 horses under the bonnet. 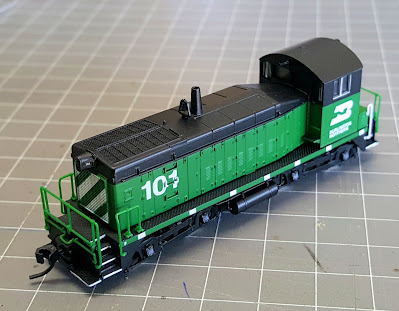 My little fellas are all Life-Like brand and are almost two decades old now.  They run well on DC, so time to get them into the computer age I reckon.  So a Digitrax DN126M2 decoder fits - just. At 10.63mm x 15.79mm x 2.72mm it gets me my motor control and lights.  Mind you, only the front lights are functional on the model, but given time, I might just be able to get a small SMD LED in place for the rear light, as the decoder is capable of driving it :-)

The first order of the day was to get the bogies off. With some research I found that they just twist to about 80 degrees and then unlock and fall out - nifty. The fuel tank just is a press fit and pulls off easily. 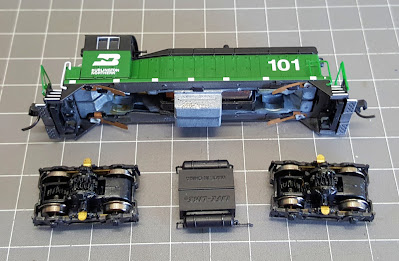 Now we can see what is to be the troublesome part - the power pickups that connect to the bogies.  They are those brass looking things at each corner of the loco.

This little sucker in the below shot.  Please note that they are not screwed to the body shell, but are plastic welded.... brittle, easily broken off, just ask me how I know... 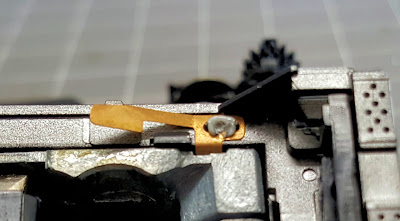 But after mucking around and breaking a few off on a loco or two, I eventually had some luck with research on the PC with good 'ol Google. Shims !  That's the answer - shims.

You get some really thin brass and cut it about 3 or 4 mm wide and insert it between the body shell and the loco mechanism where these pickups are.  This then allows the shell to come off without ripping these pickups off !  But I didn't have any!  BUT, I don't throw things out and remembered I had some HO scale loco parts from an old disgarded loco I had turned into a dummy. Yep, the bogie pickups on it had plenty of thin brass for me to work with - four or so snips and I had my shims. 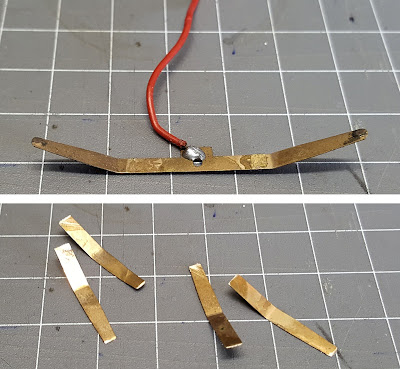 So I could now use the shims to get the loco shell off easily without damage to the pickups. So I pushed the shims in about 12-15 mm and ... 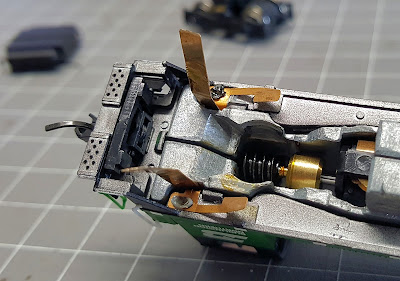 And the shell came off and the pickups were left where they belonged.

The pickups were now left on the shell where they belonged. I was able to reattach the ones I had broken off on other locos by holding them in place and with some spare plastic sprues from an old model kit and the soldering iron, weld them back into place with hot plastic. 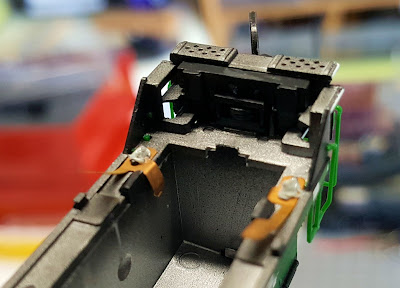 So we now have the shell off and the mechanism able to be got at. 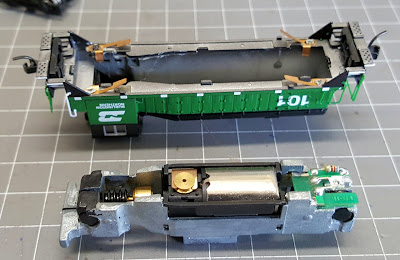 So the next step was to pull apart the mech. Mind you, I didn't need to fully strip the loco down this far to get the DCC Decoder in, I did it so I could give a full oil and grease of all relevant parts as well. 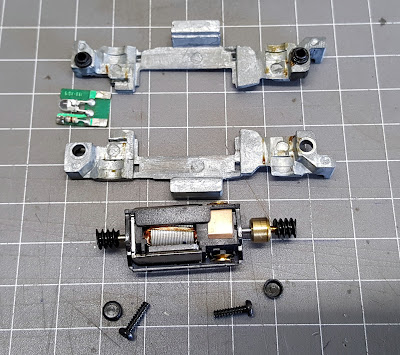 Now to make the loco DCC friendly by isolating the motor pickups. I shortened them with a pair of nippers first.  Now they wouldn't touch the loco frame and short things out on the DCC layout. 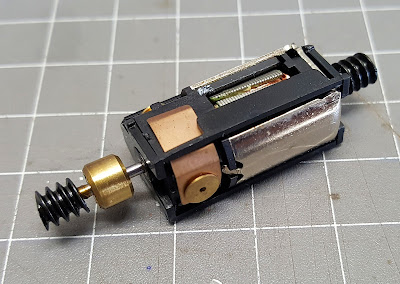 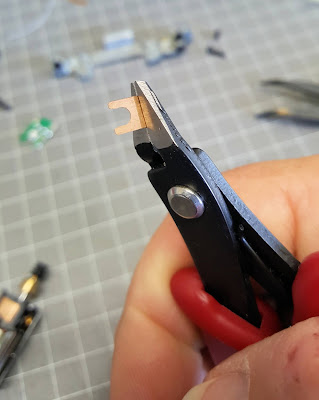 So I got my tiny small miniature wires out and soldered some to the two motor pickups I had shortened and ran them along the motor nice and tidy like. 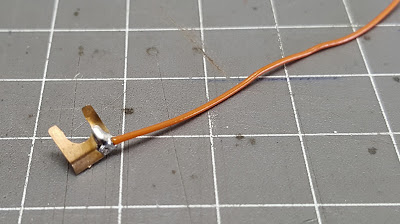 In the process, I got the Digitrax DCC Decoder out of its packet and checked it out top and bottom.
The brassy areas are what get sandwiched between the two loco halves and therefore they are the power in to the decoder. The two small cylinders or sockets at the left are where the motor wires go. And in the lower shot in the middle of the right hand side edge, is the LED for the forward light on the loco. 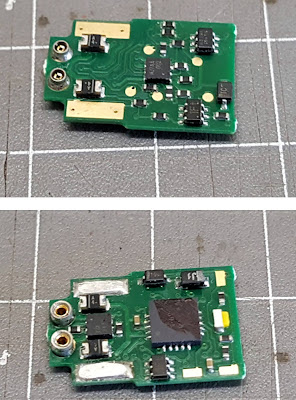 The decoder was now installed between the two loco frames - that's how it picks up the power by the way. Before this I of course got out my little light oil pen and gave the motor bushes a tiny drop of lubricant to keep them going. 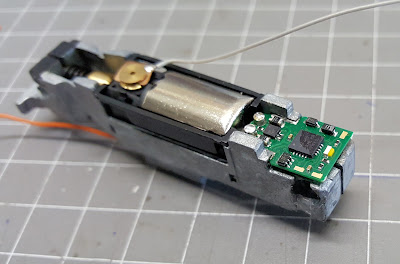 I then soldered the two motor wires to the decoder and she was almost ready for a Dodgy Brothers quick test.  Dodgy Brothers Testing 101 of a loco means grabbing it in its current state and putting it on its nose directly across the tracks so that the mech picks up the power.  Hey, it works... 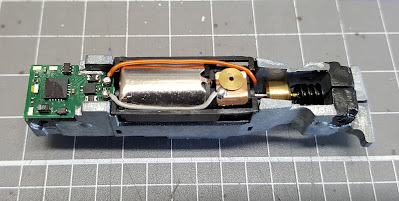 The two loco halves get a bit too cosy on the bottom for my liking, so a bit of Kapton Tape to insulate them will cure any hanky panky going on. 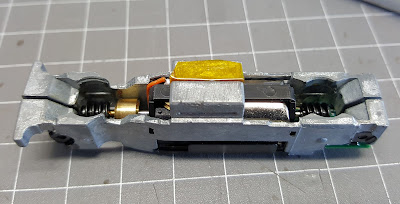 Now it was just a matter of reassembling the loco after oiling the bogie gears and putting some grease on the worm gear.  I also got some 2000 grade wet and dry sand paper out and polished the four contacts attached to the shell.

While I am at it, here is a better shot of the rear light on the loco. Even though it is a small solid bit of plastic, I reckon a very tiny drill should get me a couple of holes in it and a small SMD LED on the inside with magnet wires back to the decoder should in the end get me a rear light ... if I want to... 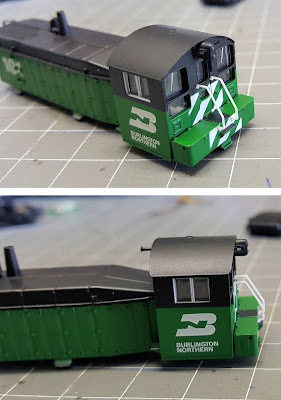 So the shell went back on and the bogies were carefully popped back on and voila - a ready to run DCC controlled loco that's been for a full maintenance as well :-) 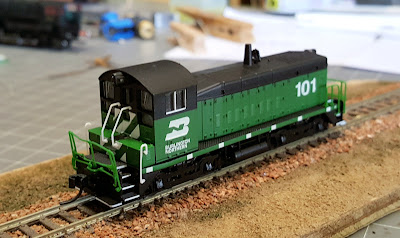