So a couple of weeks back the RMCQ went up to Bundaberg to run trains at the Bundaberg Model Train Show and what a great time we had, as usual.

I had decided that this year I wouldn't run freight trains, but would run some of my passenger sets. One of course being the Atchison, Topeka and Santa Fe Railway's "Super Chief".  I ran the 8 car set and then added the 4 extra sleeper cars to it.  Motive power was of course the AT&SF liveried EMD F7A and F7B combo of 4 power units.  They ran well for the weekend, but the sound in them was very weak.  Here is half of the motive power set - the lead A and B units. 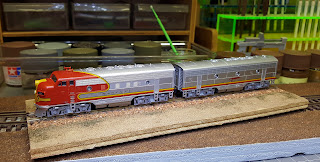 Of the 4 motive power units, 2 have sound decoders and 2 have plain decoders - so the train has some real horse power and never has a hauling issue.  I've had sound in them for yonks and it is first generation MRC sound - MRC 1658 decoders in fact. I have thought about it and decided the other day to see what I could do for the sound. In the shot below you can see the sound decoder in the A unit has a small coil speaker stuck on the circuit board and the B unit has no sound and I have also removed the front LED from the B unit as it doesn't need a headlight. The decoder in the B is a Digitrax DN163K0b.

Using JMRI Decoder Pro software, I could see that the sound volume was at maximum, yet sounded absolutely small. The speakers just weren't up to it. So I thought I might be up for re-doing the decoders and maybe using ESU LokSound or something - cost would be ouch. What the heck, let's just try putting in a Sugar Cube Speaker if it would fit and see if that helps first.  I had one kicking around and some baffle parts left over from the last job, so I had a whirl at it.

So the first step was to do some measurements and yep, there was room for a small Sugar Cube Speaker up the front of the B unit - NOT in the A unit. Hmmmm.  OK, let's swap the decoders around and put the sound in the B unit and the non-sound decoder in the A unit.

Let's start with the speaker.  So I had a left over ESU 11 x 15mm sugar cube speaker and some baffle bits.  I cut the base plate at the bottom left of the shot in two.  Then glued a strip of styrene along the edge to give 4 sides - the red arrow points to the styrene strip. 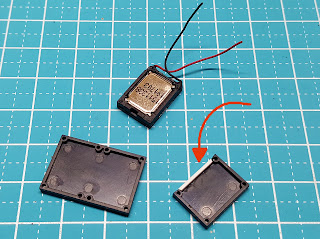 Next I glued the speaker to the baffle with Aquadhere and left it to dry overnight. I know it's not a big baffle, but the space in the loco is not big like in an HO scale loco it will have to do, as I dont want to mill the mechanism for more space. 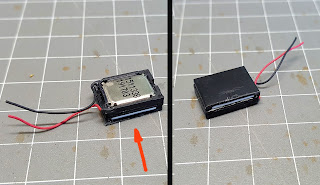 The next phase was to remove the decoders from the two locomotives. The B unit has been soldered in place to make sure of good conductivity, so I had to unsolder the motor contacts.  The first one is next to the red arrow in the below photo.

Normally you will not see the motor contacts soldered down, but I have found , and read, that it is good practice to make sure conductivity is 100%.  Now in the A unit, I found it wasn't needed, so it still had the plastic wedge clip in place. Again a red arrow to mark it in the below shot. 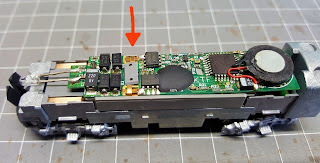 So the plastic clip was removed from the A unit, the motor contact tabs bent back

and the decoders were ready for removal. 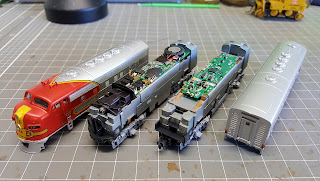 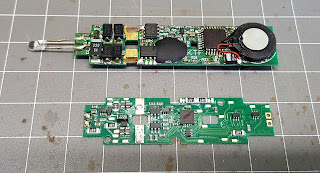 And the bottom of each for a complete look. 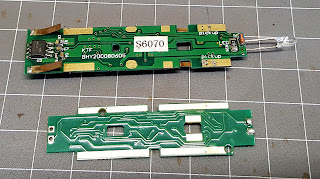 Then I unsoldered the original speaker wires and removed the speaker - it has a double sided type tape holding it on the circuitboard, which came off pretty easily. 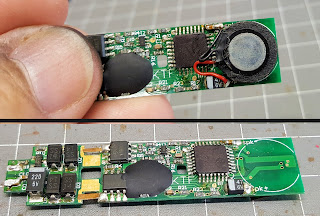 So now the non-sound decoder was placed into the A unit and the motor tabs soldered down.  Another quick test under the JMRI program and all worked as expected.

So the shell was now ready to go back on again. 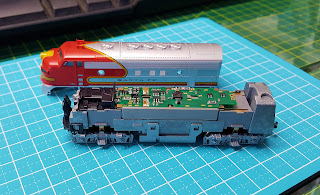 Now my attention was with the B unit locomotive and get the sound into her. Some longer wires on my SugarCube Speaker and I was ready. 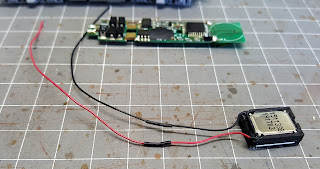 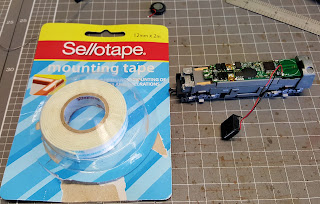 So the left hand side of the photo is the front of the B unit loco. The speaker just fits in and has two parts of nothing as spare headroom when the loco shell goes on - perfect. 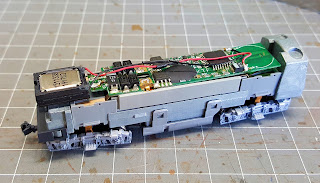 A quick test with the Decoder Pro software of JMRI and the shell was back on again.  The A and B units of one of the EMD F7 sets was now ready to rock & roll. 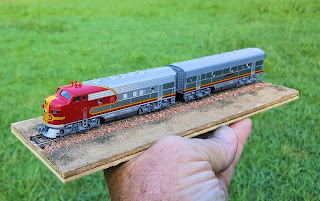 Full testing was then done and holey moley! The sound is fantatstic compared to before - wow!  I think the second sound decoder can go to another train as it wont be needed in this 4 power unit loco set now - one sound chip will do nicely :-)
Now, you can listen to the old sound here:  Old Coil Speaker
And listen to the new sound here:  New Sugar Cube Speaker
Both are recorded at the same level, so adjust your speaker so you can hear the old one OK, then dont touch the setting and listen to the new speaker setup on my loco - impressive, hey  :-)
Posted by PK at 7:07 PM