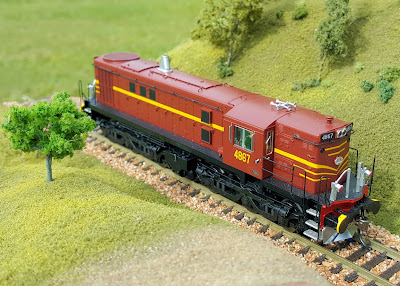 For some reason a while back I got the idea in my head that I wanted Stay Alives in my two HO scale Auscision NSW 48 class locomotives.  Being 6 axle locos with pickups/wipers on all wheels, they really shouldn't need it, but being a short loco on some of the club's long points that don't have positive frog powering, they stuttered at times or completely stalled.  So easy peasy - in with some super capacitor based Stay Alives I said.

Upon opening them up, it was evident that there isn't too much swing room inside the locos - that's the problem with these narrow body locos compared to the wide bodied ones like NSW 422's and such.  The speaker, being an old fashioned normal coil type (at the right in the pic), took up a lot of room and was my first thought for removal to give me room for maybe a homemade Stay Alive.

But then I thought, why make it hard for yourself.  I knew that my home made ones were a tad too large for the front end of the loco, so I hunted around and found that I had a few of the TCS KA4 Stay Alives in my DCC goodie box. 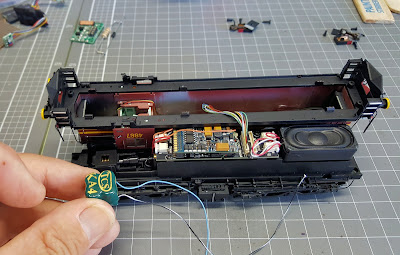 A quick test fit showed me that they might just be able to be squeezed into the space above the front bogie just in front of the driver cab, at the left hand end in the pic. 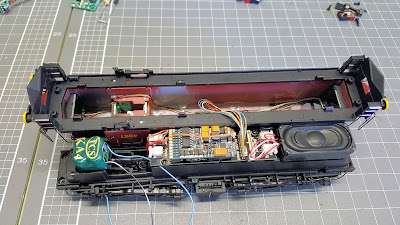 Now, the DCC Decoder used in this loco is the ESU LokSound Select with a 21 pin connector.  Research had shown me that to add in a Stay Alive I needed to solder a pair of wires directly to the decoder.  Bugger - I'll need to get the magnifying headpiece out to see that small!  So here is the decoder showing both sides (the squares on the grey modelling mate are 1 cm across).  In the lower pic, I'll need to solder wires to two of the solder pads on the left hand side of the decoder - small...  So no blow torches or plumber's irons (nor cracks) for this job - out with my nice temperature controlled beastie I got from Jaycar a few years back - just the trick for small electronics work. 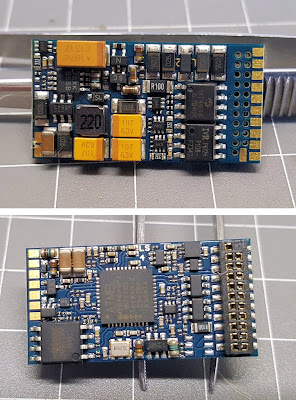 Now whilst I had the shell off I also decided to add some heavy gear oil to the gear towers front and back, so I had to take the speaker out and remove its sound box.  A few drops of the heavy oil onto the brass worm gears and I was able to put the speaker back in and move along. 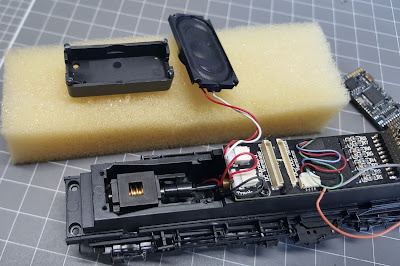 So the soldering iron was now hot and I got the correct coloured fine wires out of my storage boxes and also got out the documentation that came with the decoder that showed me where to put the wires.  Carefully I tinned the solder pads first and then added the wires. Done and no overheating - should be right to go.  On a side note, here is a little trick I found on the web - when you don't want a small thing to move across your bench, just get out some masking tape and wrap it onto itself with the sticky side out.  It will then stick to the desk and your decoder will stick to it - no movement while I soldered :-)  I went one step further and wrapped it around a piece of old paint stirrer and it in itself is portable and sticks to the bench and then the small item to it - reusable. 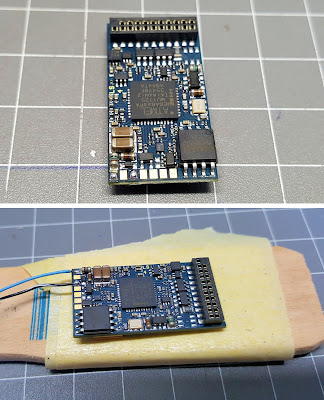 So now to the TCS KA4 Stay Alive. I decided I wanted a gander at it so I removed the heatshrink from it as it wasn't necessary for it to have any on where I was going to be putting it.  The unit is made up of 4 Super Capacitors, each of 2.7 volt 1 Farad capacity.  The little PCB that they are soldered onto, have the diode, zener diode and resistor mounted on it. All up it is a nice and neat package that will do the trick and is smaller for the same capacity, than my home made ones. 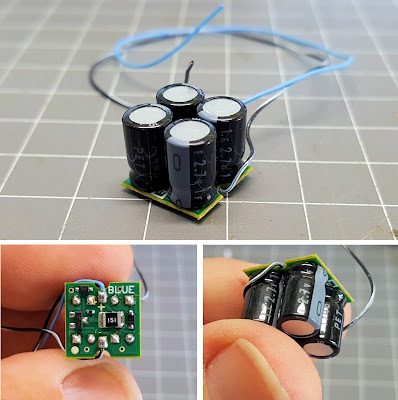 So I temporarily attached the Stay Alive and tested the loco to make sure I hadn't blown anything up.  All was good, so this happy chappie proceeded to finish the job. 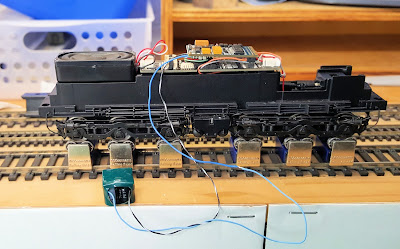 So I had tested the fit and knew the Stay Alive would just fit in the space above the front bogie gear tower.  I then decided to make a small shelf to sit on the bogie to protect the Stay Alive from oil from the worm gear and also for the double sided tape to stick to, to hold the Stay Alive in place.  I used some scrap Styrene card I had kicking around - 10 thou thick I think it was (inches).  I trimmed it to fit the nooks and crannies of the bogie and it was a snug fit, hence no glue was required. 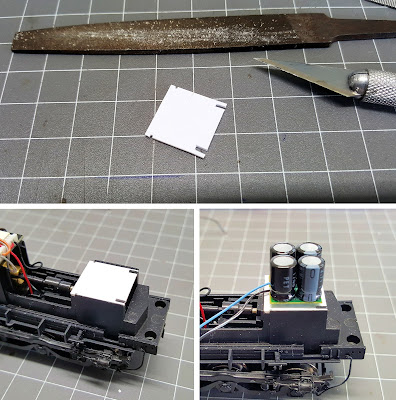 It was only after making the shelf that I decided on a change - I still needed the shelf for oil protection, but I would use double sided tape to stick the Stay Alive to the side of the loco shell rather than the shelf as it gave a smidge more verticle movement space for the bogie. 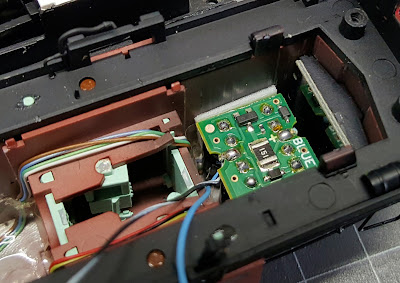 I had to make sure all the wires were neat as well since there is not much room under the drivers cab and I did want it to sit down properly, so I arranged the wires neatly and then a few dobs of UV Glue was used to lock them into place. 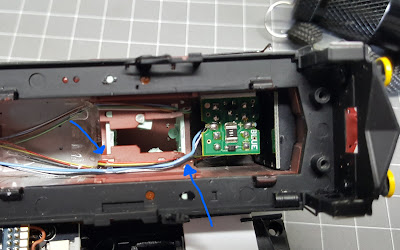 Eagerly the loco shell was put back on, the couplers screwed back into place and testing performed.  It passed with flying colours.  I had also made sure to program the ESU decoder's CV 113 to 255 and CV 315 to 0.  This is required if you attach a Stay Alive to an ESU LokSound decoder.  CV 315 tells the decoder that there is a Stay Alive attached and the other CV, if set to 255, gives the maximum runtime whilst the loco is being powered by the Stay Alive.

Further testing has shown that I get between 3 and 5 seconds of power when the Stay Alive kicks in.  At a very slow speed (10 percent throttle) that equates to about 10 cm movement along the track and at full tilt it runs for more than 66 cm.  I think I am now safe for running across badly powered points and dirty track :-)

A week later the other 48 class loco got the same attention and both bad boys are ready for some running down the club... when next it is open. 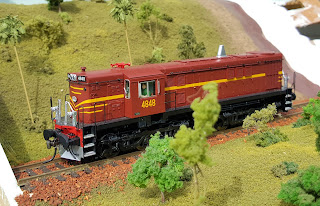