Picture a Bloke Hitting Himself 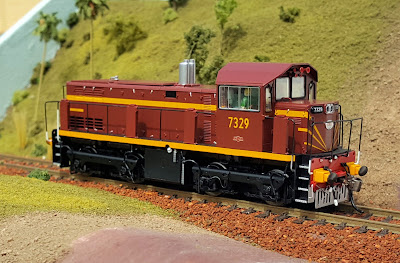 About 6 or so weeks back I spotted this cute little shunter on the Australian Modeller website and decided "Stuff it" and bought it for myself just because.  It was only DC, but was listed as DCC ready, so no probs there. So of course the first thing to do after ripping the packaging off the box and getting the loco out, was to give her a spin on the test track under DC.  The HO scale loco was of course one of the 2nd release Auscision NSW 73 class locomotives. She ran nicely and the lights worked fine.  So a bit of running in of the motor was done. 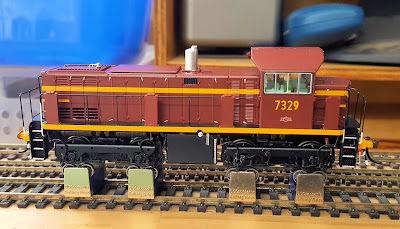 Of course it didn't take long for me to want to get the lid off and have a peek inside. So we have complex light boards at both ends, the light switching board for the lights at just to the right of centre and of course the DC plug in board where the DCC decoder is to go.... oh, a 6 pin socket...  Unusual for a HO locomotive, but not a biggy I suppose. 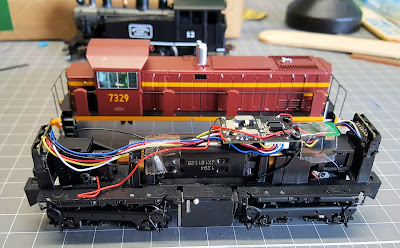 So I hunted through my DCC Decoder box and found my N scale stash of spare decoders and surprise, surprise, I had a suitable beastie on hand - a Digitrax DZ125IN which has the correct NEM651 6 pin configuration that suits this new loco. The following pics show the DC board front and back at the top of each pic and the Digitrax DCC Decoder at the bottom of each shot. 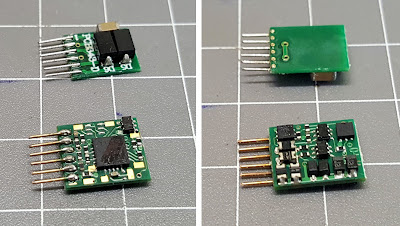 So with my trusty tweezers, the decoder was inserted with the correct orientation and then tested - all good.  The lights worked front and back, as did the motor and she responded nicely on the test track. 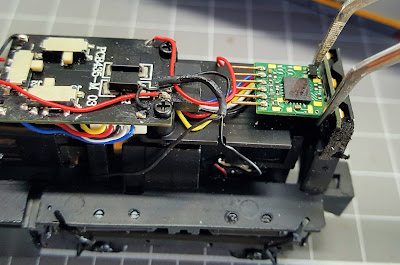 So she sat around for the next 4 weeks as I was trying to get a hold of anyone who does decoder installs with sound for these 73 class locos.  Nup, nope, nada, nyet - no one that does the 73 class installation has stock of any decoders due to the current Covid problems around the world - the factories are all closed and no stock is available to them.  Well, I said to myself (I talk to myself a lot - mainly chastising myself for stuffing things up), I did happen to have a spare ESU LokSound v5 Micro Sound Decoder kicking about that could go into this loco if I wanted to. I would need to find a sound file for it as it was a blank one. Yeh, what the heck says I, and off I went and cleared a space to start.  Take up model trains they said - it's a relaxing hobby they said...

So the loco has this little hatch on the roof so you can access the lighting combination switches without taking the whole body off.  So this lid was put in a box for safe keeping as I do tend to loose things from time to time and then have to spend ages finding the dang things. 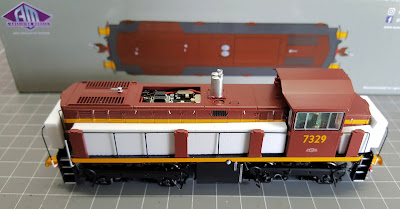 Then the body came off.  At least with this model the body shell is not tethered to the mechanism with wires and such - nice and clean - remove it and place elsewhere (for safety or course...  now where is that box with the small lid again?) 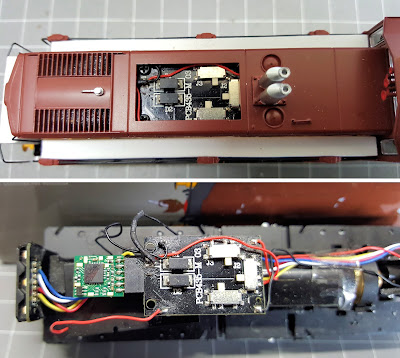 Now, the decoder I had was an 8 pin type, so it wouldn't plug directly into the loco, so I was going to have to solder it in with some wires.  So to make sure I got things right, I documented the motherboard in the loco so I knew which wires were to go where.  I also researched the standards for 6 pin and 8 pin decoders to see what the correct coloured wires to use were. 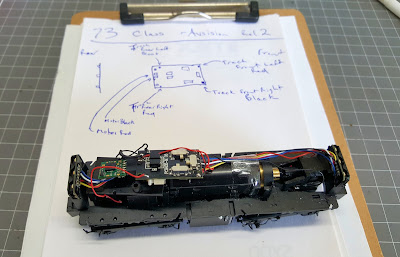 Then I did it - I unsoldered the motherboard and took a gander up close to see how much room I had to manoeuver around with the soldering iron for when I took the 6 pin socket off the board.  Only the black socket at the right hand end had to go, the other ones are the lighting boards and could remain, as I reckon I just had enough room to not have to go that extra step since I was using the "micro" version of the decoder.

So the loco now was motherless, well, motherboardless. Fingers crossed I had the documentation right and a good plan. 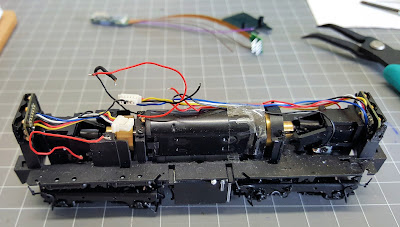 Here we see the decoder and the orientation and location it should fit. I could have removed the Next18 to 8 pin ribbon cable and soldered directly to the decoder, as there are suitable solder pads there to do it, but in case I wanted the decoder for somewhere else, I thought I'd leave it as is. 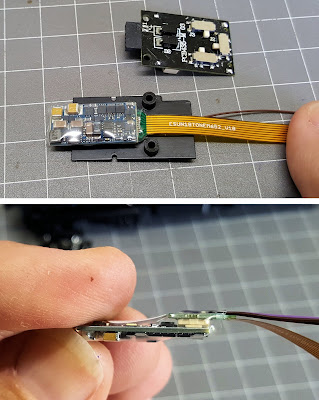 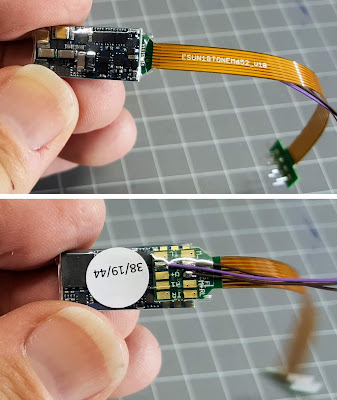 So the 8 pin end of the cable has of course the 8 pins - duh.  So I ended up unsoldering these 8 pins so as to solder on my wires. 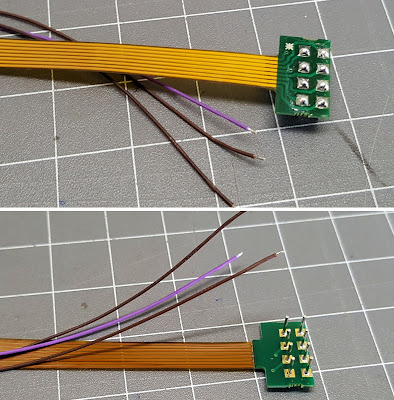 So next, that 6 pin socket was carefully desoldered from the motherboard. 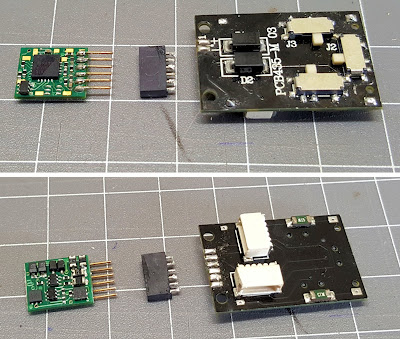 Next, the correct coloured wires, in the correct order, were soldered onto the motherboard. The motherboard was then screwed back into place and the decoder test fitted to ensure it would fit - and yes it did. 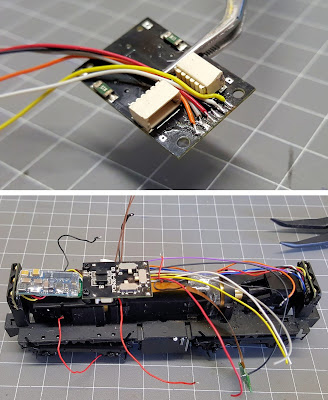 The wires were then soldered to the 8 pin end of the connector cable as per the standards. 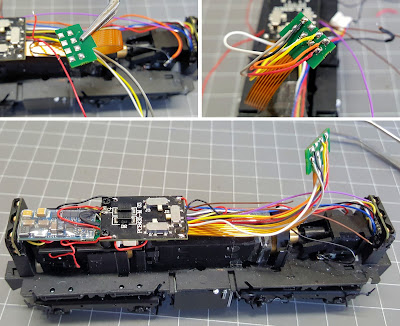 So next to test it.  With a smile on my face I put it on the test rig and both head and tail lights came on simultaneously and no movement was had, nor sound either for that matter.  Lots and lots and lots of head scratching, review of my method, standards and such were then done over the next day.  Research was done - heavy research.

Standards, correct colours - my backside!  It would appear I couldn't read a chart or document to save my life.  Well, actually it was my implementation that let me down.  So when transcribing the standard colours to the motherboard and my cables, I had forgotten to take into account that I was looking at it upside down and left to right and not right to left and proper side up... Confused?  I certainly was! 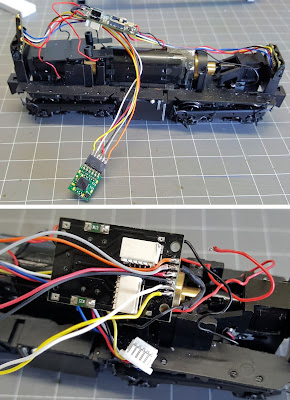 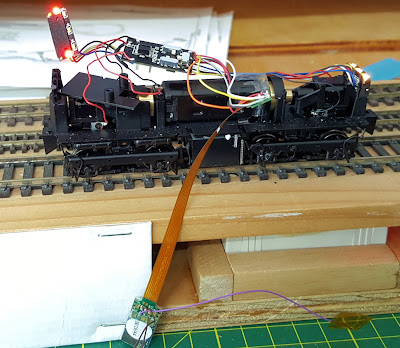 Luckily the decoder was not damaged at all. So after fixing my ballsup, it was back to finishing off the loco.  Wires were tidied up and some Kapton Tape used to hold it together and neat. 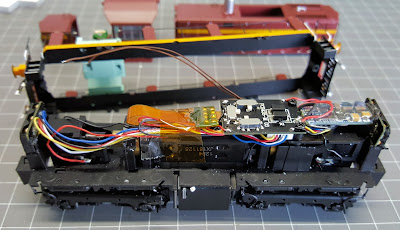 The walkway and loco cab detail with the drivers were then put back in place.  You will of course be wondering about the two brown wires still floating around - these are the wires to go to the speaker, which will be located in the roof of the loco shell. 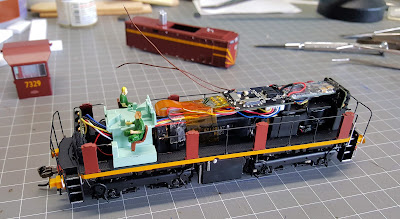 Roof, cab roof, it's a roof.  So I used some fine double sided tape to locate the speaker in the roof of the cab after painting it white.  The speaker is an ESU 11mm x 15mm Sugar Cube speaker and I used the 3mm baffle kit on it. 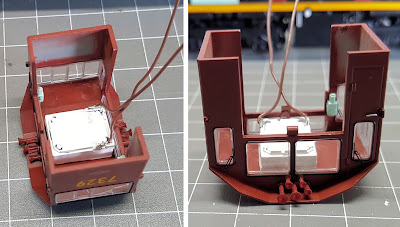 The loco shell then went back on. 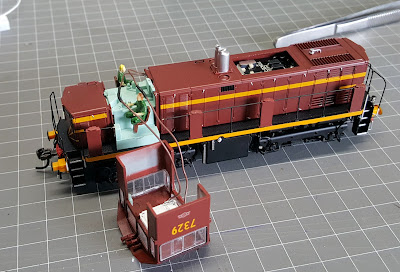 The cab went back on and now all that was left was to find where I had put the box with the switch cover! 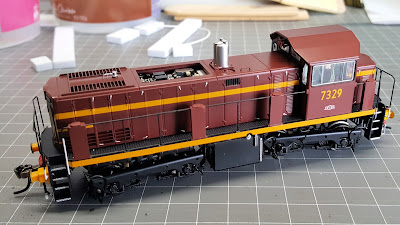 Onto the test track and away she went - like a bought one.  I played with the settings a bit and programmed an Alco Switcher sound file to it for the time being as there are no proper NSW 73 class sound files out there in the free domain.  I'll have to contact the mob down south to see if he'll sell me just the sound file for my decoder.

But besides not have the exact correct sounds, she's a little ripper mate :-) 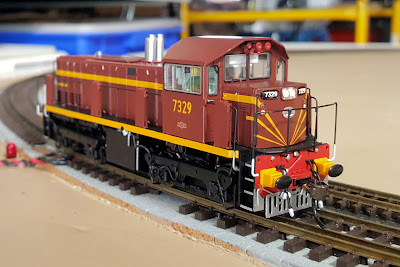 OK, Mr Murphy jumped in at this point. When I then went to turn on/off the marker lights for better running... a marker light in white and one in red at the front right had failed - arrrgghhhhh.  It could wait till the following day.

When I eventually got the lid off to see which wires had fallen off or LED's I had crushed, I found some black foam had gotten in between the LEDs and the aperture for them to shine through - phew!  Cleared it out and good to go.  Now it was complete :-) 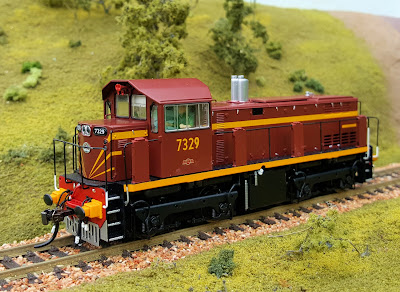