A Dive into the Too Hard Basket

OK, so here's the story bit first - a number of years back, crickey, it's actually five years ago this all started !

I bought myself a birthday present of a pair of HO scale Broadway Limited manufactured EMD SW1500 locomotives in that beautiful yellow and green livery of Missouri-Kansis-Texas Railroad.  I made sure to get them with DCC decoder and sound installed too - they sure did look purdy :-) 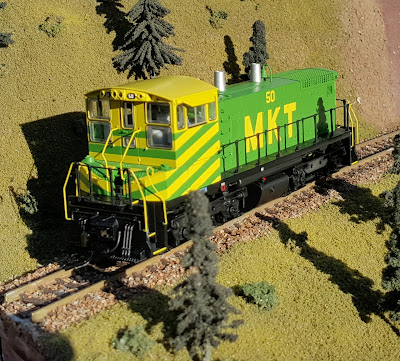 Number 54 was perfect out of the box. Number 50 ran for a bit then went kaboom. It had ceased to be, it was bereft of life, it now rested in peace. It just stopped and made that burnt electronics smell. So I eventually (yeh, well, a few months later) opened her up and found that the sound decoder had kicked the bucket and fallen off its perch.  I tested the motor and it spun OK, or so I thought...

Anyway, an email to the manufacturer and they said if I was happy to install a new decoder they'd shoot one out under warranty. When it arrived I was a tad busy with work and it took 6-7 months for me to get around to doing the replacement.  But I did eventually get around to it and pulled her down into parts and replaced the smelly old decoder with a brand new one that even smelled nice and new :-)

I tested the motor and it spun OK, so I thought it was OK....  You get where this is going ?  Anyway. I put it in the too hard basket as I was busy at work and the 12 months had expired since I had purchased it - so no warranry left.

So for my birthday this year a month and a bit back, I decided to get the loco running, as I now have plenty of time on my hands. So I stripped it all down and got some multi-meters out and connected them up to a DC power supply and set about measuring for volts and amps and stuff all over the loco.  Well blow me down if the motor spun fine and freely with no binding ! But here's the rub - the damn thing was drawing 2½ amps under no load !!!  So that turned out to be the cause of both blown sound decoders.

So, what the hell, I emailed the manufacturer to see if they had spare motors available - and yep - sure do. AND I thought why bother just putting in a non-sound decoder which I have kicking around the place - go the full hog I said to myself (I do that - talk to myself - but I don't always get the answer I want - I'm cantankerous that way). So I asked if they still had sound decoders for sale - yep, they sure do.  So a motor and sound decoder were ordered, paid for (95 Yanky bucks - not bad actually) and shipped to me. They arrived last Friday.

Now here are a couple of shots of the new donk and sound decoder. 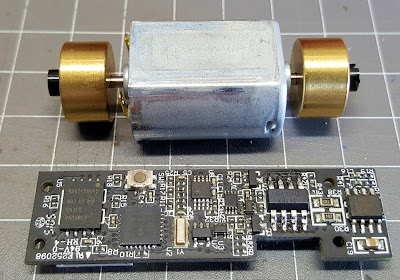 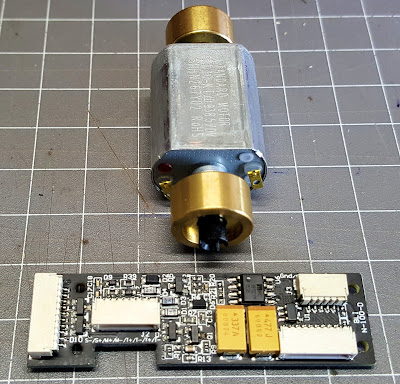 I tested the new power unit and found that it runs at no load with only 0.02 to 0.08 amps current draw - BIG difference to the dud motor I had.  Now, first of course I went and lubed up all the gears and shafts with the relevant ultra-light oil, light oil, heavy oil and grease. Next it was time to install the new donk - not quite the original 12 cylinder as per the real loco, but a sufficiently strong enough electric one for my needs on this model. 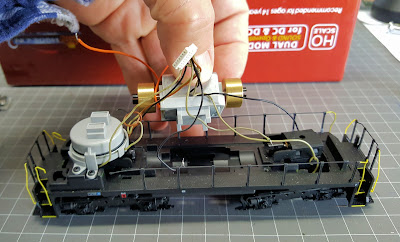 Shafts were installed and the motor block fixed into place.

Next a test fit of the new sound decoder to make sure all fitted OK. 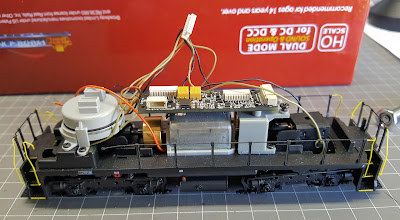 I had to open up the other of these two locos to compare with it what I was working on to make sure I was getting it right - I was :-)

A tidy up of all the wires and some kapton tape to hold them in place.

Complete!  Job done :-)  Well, of course I did also put it on the programming track and test it all and then run it a bit and compare it to the other one - all good as gold.  I am happy now that she is running again.  She'll also get an outting tomorrow at the Ex-Coppers place too :-) 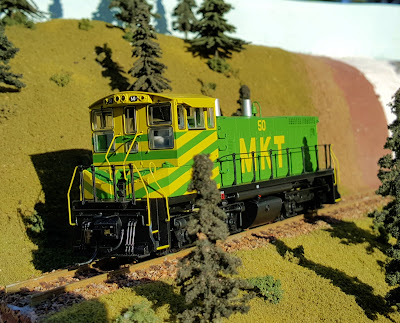